Vladimir Tichy is a ceramic sculptor. He was born in Prague, Czechoslovakia in 1926, where he studied art at the University of Fine and Applied Art. He arrived in Australia in December 1968, after the Russian/Warsaw Pact invasion of Czechoslovakia following the Prague Spring.

He opened a Ceramic Architectural Studio in Parramatta in 1969  – Studio Dybka Tichy. In the 1970’s, Sydney CBD and many suburban and country buidlings had his murals in their public spaces:

Many have unfortunately been destroyed by refurbishing and demolition. There was a huge mural in the former Baulkham Hills Entertainment Centre, but now demolished as part of land clearing for the Norwest Rail Link.

– The mural on the wall of the stairs to Museum station from Bathurst Street.
– The large multi-panel work in the foyer of 28 Foveaux St, Surry Hills – The Macleay College Building.
– The mural within the Orange Ex-Services Club, moved to a more prominent location during their renovation. This was a mammoth task as the mural is 12m long and 3m high. They still hand out the leaflet with the story and inspiration behind the mural.
– St Paul’s Catholic Church in Albion Park (near Wollongong) is decorated by him throughout. Works include three large wall murals of Jesus, the Way of the Cross, and a statue of Mary with baby Jesus. The church is celebrating their 40th year anniversary in January 2015. For more information, click here.

After Studio Dybka Tichy closed down, he worked for Norbrik in a custom built studio in what is now Bella Vista and Norwest Business Park. It was here that he created the large 30m mural for the Hills Entertainment Centre.

He retired in his 60’s and had a small studio at his home in Hornsby. He had been working there and exhibiting with the Sculptors’ society until the death of his wife, Georgina, in 2009. All inspiration left him when she died.

His sketches and documents have been accepted by the Library of NSW to preserve the record of a very successful Sydney artistic ceramic studio.

The Shepparton Museum in Victoria has a selection of his works in their collection. 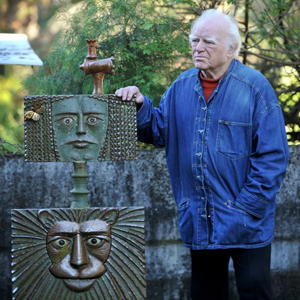 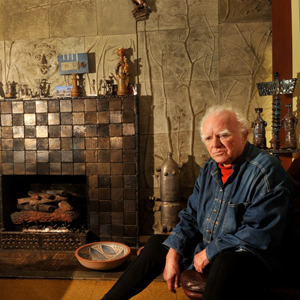